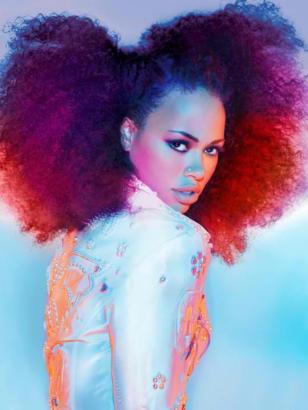 I seem to be catching the major late bus when it comes to new artists and music lately, however I couldn’t pass up this California girl, that not only my friend’s have been tweeting her sultry lyrics but also has been a radio sensation with her hit single, “Only Wanna Give it to You” featuring J. Cole.

Elle Varner is a 23-year old West African, Black, and Swedish bred songstress has released her first album, Perfectly Imperfect. and Although I haven’t reviewed it yet, I  have been stuck on her latest mixtape, Conversational Lush. The tracks remind me of an old school meets new school sound, with a very sultry voice to compliment. Elle also switches it us with her rhymes. Rapping over a jay-z inspired beat. I instantly downloaded her tape into my iTunes and have been jammin’ all week.  My favorite songs are 32 flavors, Feel like a Woman, Refill, and So Fly. Maybe it’s the fact that I can personally relate the lyrics or the songs just went a long with this gorgeous weather the Bay Area has been receiving.

In the march issue of Ebony Magazine, Elle Varner is featured in the “Watch the Space” where she discussed one of her songs, “So Fly”.  It’s a true story of a girl battling self-esteem issues at the time when she was batting a low point in life.  She says, “At the time I work “So Fly”, I was heavier. I was in college and was really struggling with body image and being accepted.  I thought losing weight would make me better in some way… I started to make better health choices, better food choice, however you look and whatever size you are, you still have these issues.”

I agree that regardless of your weight or body image you can still struggle with self esteem issues.  This song teaches her listeners that you can be fly at any shape. Don’t compare yourself and your worth to anyone else just because society has conditioned us to do so. By using the “What if” sequence in her lyrics kind of sends a reminder to love your own body and soul.

So basically all I need
Is to be everything but me
Colored contacts
Liposuction
And some implants
Somehow that don’t make much sense
I must be out of my head
If I think, that I am governed by material things.