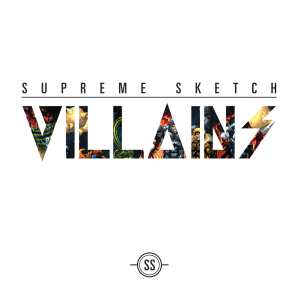 After many years, days, contemplation, and a rites of passage, Supreme Sketch releases his first mixtape “Villains” as an independent solo artist.  Born Anthony Ragland and raised in the Bay Area, Supreme Sketch has always had a love for music and the Hip Hop culture.  He decided to use his “Villain” alias to capture the essence of him as an artist. When describing his movement he says, “I really feel like there is good in every bad guy.  Villains make it happen, regardless.” By throwing up the peace sign to stamp Villain on the map, Supreme Sketch has made himself a known staple for upcoming artists of the bay area.  The mixtape itself as he describes “Down to earth music; if you aren’t down to earth or understand my perspective with life you will not be able to relate to this mixtape.”  Sketch uses original beats and well-known samples to help him tell his real life scenarios that one can relate too.  In my opinion, he gives me the feel good music vibe but I can also crank it up when I want to hear a message. “Color Boxes” derives from his phase as a shoe head and by using this as a metaphor you are able to figure out the meaning behind it.  My favorite songs happen to be Color Boxes, Back Stabbers and Show Me, but I’ll let you be your own judge.