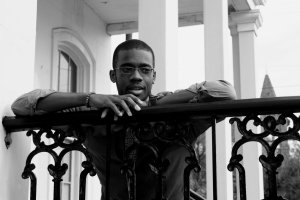 This Sunday afternoon, I had a chance to sit down with New Orleans Emcee Slangston Hughes and engage in a rich conversation that was not just about music, but the culture and drive that continues to flow through his veins as an artist and into the New Orleans Community.  Born Renard Bridgewater in the uptown New Orleans area, Hughes has evolved as an artist in many dynamic parallels that he shares with me so descriptively.  As a recent graduate from University of New Orleans, Hughes is currently working on his latest mixtape “Nu Growth” which is set to drop this September to your digital screens worldwide.

Reesa: What is your inspiration behind your music?

SH: I used to always tell people that in this day in age you deal with a lot of single parent households, but for me I was dependant upon three women, my grandmother, my aunt, and my mother.  Without them sculpting me there would be no Slangston Hughes, so that’s the main three inspirations behind my music.

Reesa: So where did you get the name “Slangston Hughes”?

SH: I started out as “Super Nova” which was my first name. I started back in high school MC Battling and things of that nature.  Three years ago I went with “Slangston Hughes” because I was looking for something catchy but I also wanted it to reflect my content. I have always been the MC that likes to uplift, with that behind said, knowing a little bit about Langston Hughes and his poetry I wanted to keep that idea like the term Curious Jones (Curious George).

Reesa: I read about your perspective of New Orleans rap, because I know that most of my readers do not know what’s going in with the Hip Hop Culture in New Orleans, How can you describe your position within the new era of New Orleans Hip Hop?

SH: In comparison to pre-Katrina, I mean a lot of people, when you hear New Orleans Music, From a Hip Hop Perspective only know Cash Money, No Limit Records “Bling Bling Era” which is cool and we would’ve never had that spotlight if it wasn’t for those entrepreneurial record labels that started out before us.  Post-K, the new era, it’s taking it to the next level because you are seeing a big utopia of MC’s that are working together down here that are putting on our own events and product.  We are not waiting to be put on.  We are sharing the spotlight that is brighter then it’s ever been.  I would say I have more lyrical content.  Some even say I sound like I’m from New York. (laughs)

Reesa: I agree. It’s not what I’m used to hearing coming out of New Orleans.  I saw that you are working within the community of New Orleans. You are founder and co-host of a monthly showcase called “Uniquity”.  How did you get started with that?

SH: I got started with that April of last year, I have been working with a 4-piece band for a majorities of my shows.  It was more or less the next evolutionary step for me. We have a hip hop artist showcase that already goes on but I wanted to give artists into Hip Hop and poetry a chance to work with a live band.

Reesa: I really liked your latest post on your blog, entitled “What Kind of rapper are you?” where you compared coffee to Hip Hop.  One of the descriptions was Raspberry Hibiscus (a symphony of color, aroma and rich character sure to leave an impression) why do u think you are that instead of what I think Mocha Java?

SH: (laughs) It’s funny because I was randomly at my day job one day looking at a random coffee brochure and I found the correlation of those words in the descriptions work together well to be represented as an MC.  The way that it was phrased was something I could use for a bio or twitter profile.  It was very sync with what I felt on stage or audio wise.

Reesa: Gotcha. I actually thought you were more Mocha Java (laughs) (earthy and very full bodied, with hints of spice and gentle sweetness) but I have never met you so maybe your stage presence would tell me different.  Which brings me to my next question. I noticed your facial expressions on some of the sites you sent me.  It seemed like you were really into it, How would you describe your stage presence?

SH: Audience participation is needed because you feed off their energy and its then reflected into your performance so I make sure that I have my wireless mic with me because to come over correctly when announcing your words I want it to be clear as possible to the audience.  Down in new Orleans you have certain people that come to shows just to look pretty (not really interested) so I make sure that when I leave the stage they will embrace the show.  By the time I’m done with you. You are going to have a good time.

Ok I heard that!

Slangston Hughes was highly affected by Hurricane Katrina that shows in his music.  I feel that his songs show reflection and emotion that anyone listening can relate to.  With issues pertaining to post-Katrina, Hughes continues to go hard in the community with his showcase and music.