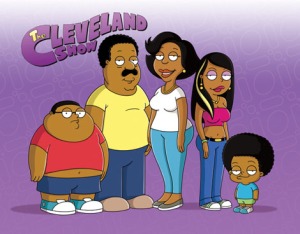 Really?…..I guess.  That’s exactly How I felt when watching “The Cleveland Show” for the first time yesterday, monday at 8:30 pm.  I am not much of a cartoon person because they just make me mad sometimes LOL But I will tell you that this cartoon that is supposed to be the “Black” family guy made me laugh just a tad bit.

According to LA Times The Show is dianosed as so: Following his divorce, Cleveland Brown (voiced by “Family Guy” producer Mike Henry) announces to his friends on “Family Guy” that he is taking his son, Cleveland Jr., and heading west to become a minor league baseball scout. But first he makes a stop in his hometown of Stoolbend, Va. There Cleveland gets sidetracked by his high school sweetheart, Donna (Sanaa Lathan), now divorced from the man she chose over Cleveland. Before long, Cleveland and his son have moved in with Donna, her teenage daughter, Roberta (Reagan Gomez-Preston), and 5-year-old son, Rallo (also Henry), who is a foul-mouthed stand-in for Stewie, channeling blaxploitation films rather than a British accent.

So did you know the Cleveland is played by a White guy? Yeah, Exactly. I can’t laugh too much because what does the producer of family guy know about being a black man living in certain situationns today. I’m sure he gets help on the script but something just doesn’t click to me.   He also sounds really mono-tone, which throws it all off.  If The Cleveland Show just worked on their dialogue, it would be a great ball of laughter for me.